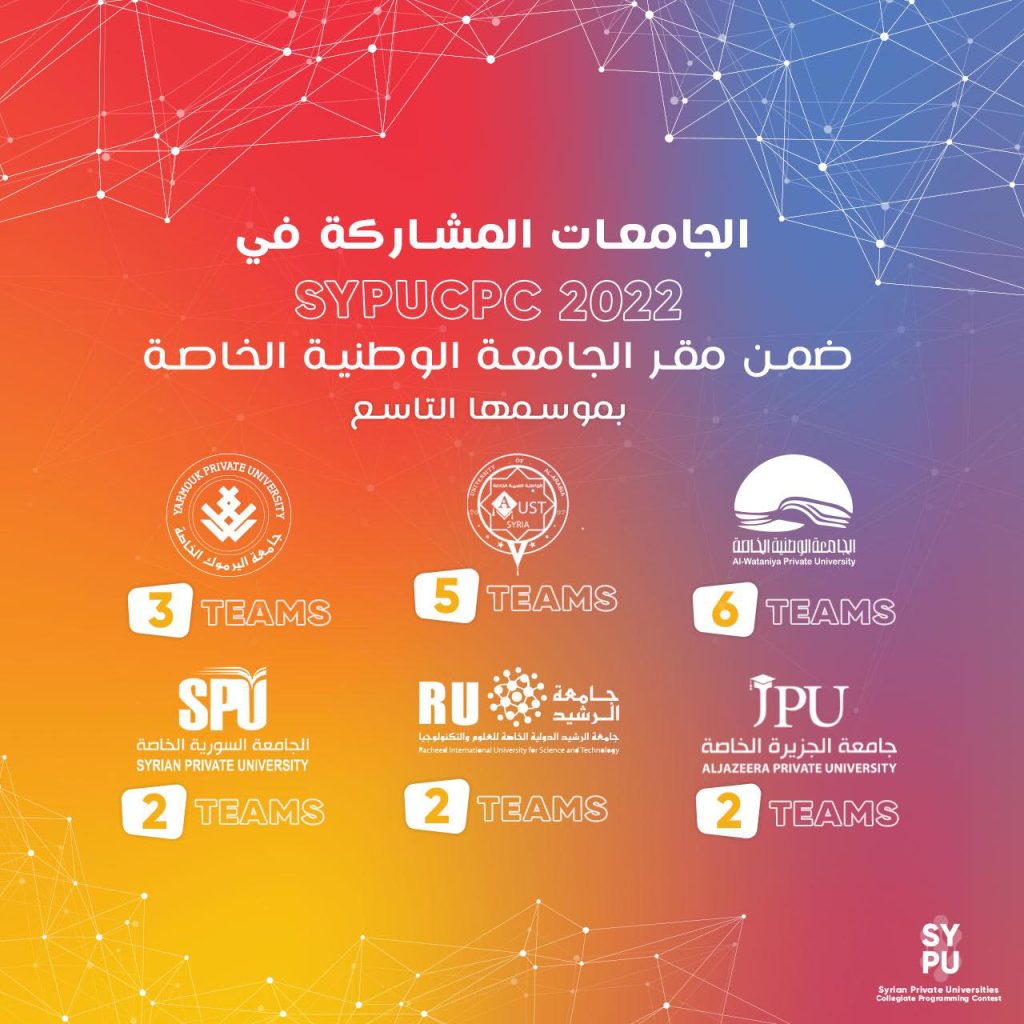 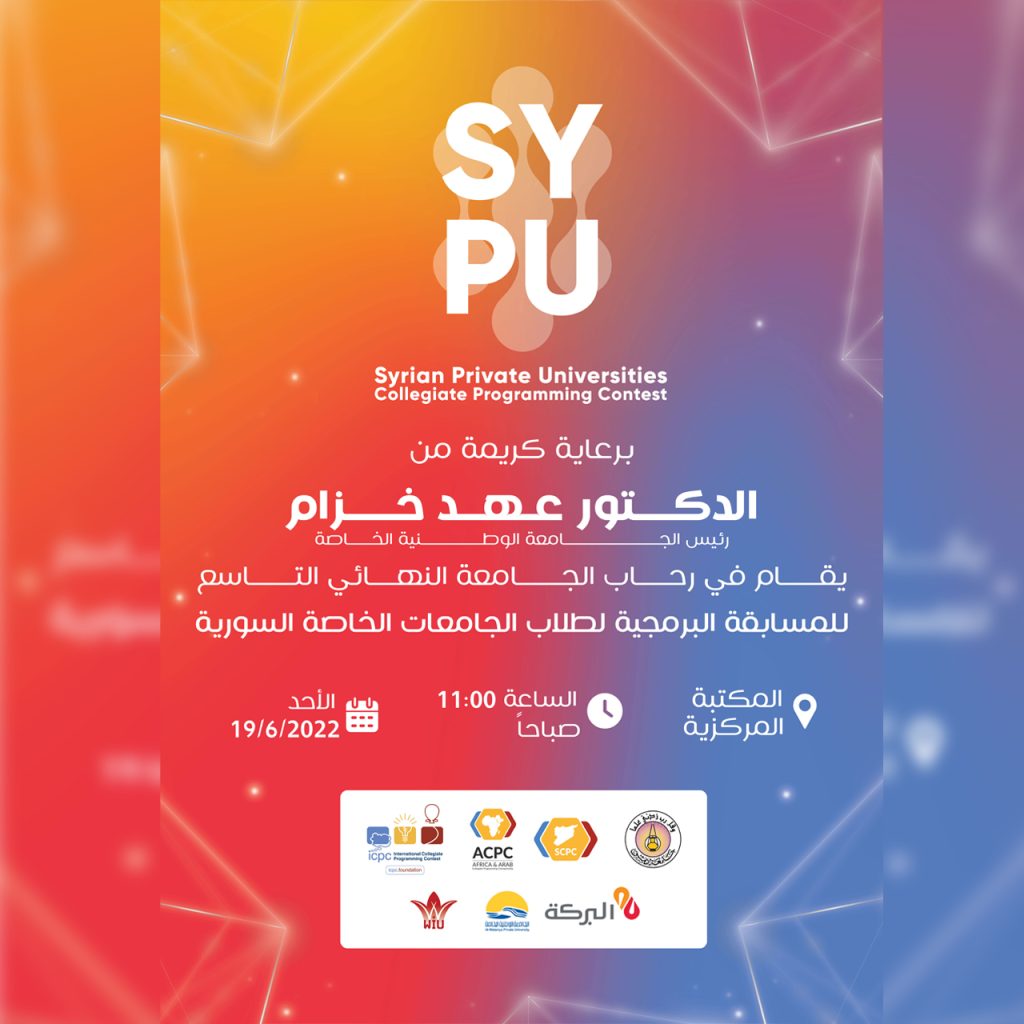 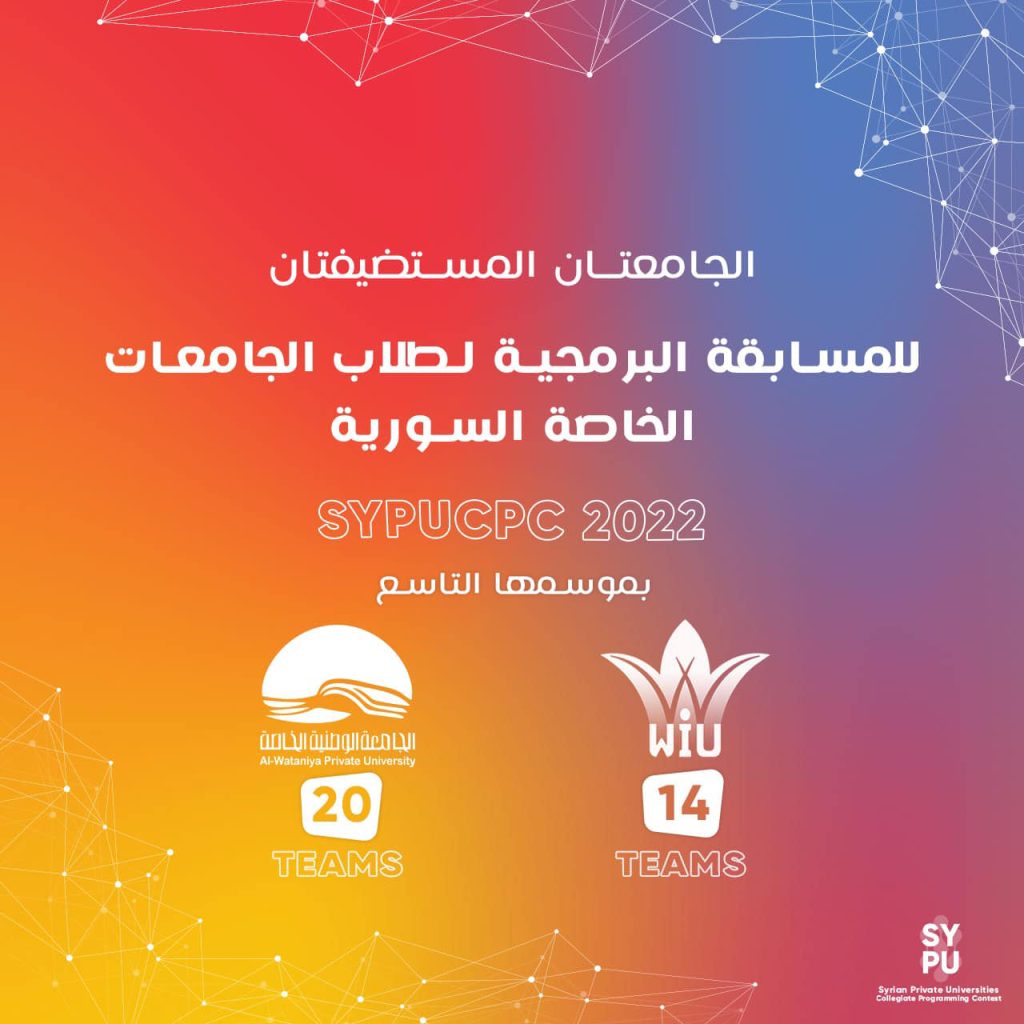 It is an international collective software competition for university students around the world. It is also a competitive educational program on a global level, drawing attention to the performance and aspirations of modern generations in solving world problems related to computing and computer sciences over four decades.

Shedding light on the global situation in the field of computing and computing.

Enhancing cooperation and solidarity between students from different countries.

Introducing students to the most important modern software problems and developments in the field of computing.

The stages of the global programming competition:

The first stage: the competition takes place between the teams at the level of one university (including the Syrian private and public universities SCPC-SPUS).

The second stage: the competition takes place between the winning teams at the level of Syria (SCPC)

The third stage: the competition takes place between the winning teams at the level of the Arab world (ACPC).

The fourth stage: The competition takes place between the winning teams at the world level (ICPC).

The mechanism of work of the programming competition at Al – Wataniya Private University:

First, registration doors are opened for students wishing to participate in the software competition through the university’s website, and then individuals are selected on certain bases and divided into several teams so that each team consists of 3 individuals. College of Engineering, “Computer Engineering Department.” Third, after the end of the training period, the selected teams are subjected to an online test on global websites for the global software competition, which is a set of software problems of varying difficulty level during a specified period of time. Fourth, the winning teams are selected based on their solution to the largest Possible number of programming issues, taking into account the time taken to solve.

Finally, Al- Wataniya Private University will hold the official programming competition over two consecutive days, where a pilot competition will be held on the first day in preparation for the students, and the approved basic competition will be on the second day and the results will appear online after completion in a relatively short time.

Working in a team spirit

The coordinator, Dr. Ammar Rimawi, supervised the primary (internal) competition, which targeted 160 students, of whom 12 qualified initially, with a total number of (36) contestants, who were divided into groups and provided with the equipment and computers necessary to work.

The competition lasted for about several hours, with the coordination and supervision of the engineers (Bayan Mando – Abdul Rahman Al Kayyal) and the trainers (Naseem Daghestani – Muhammad Nour Khalif), who provided the students with all the information, practical applications and important advice, so that six teams consisting of the best committed trainees were nominated in the software training camp that It was established by Al- Wataniya Private University and they are as follows:

It should be noted that the programming competition at the level of Syrian private universities will be at a high level of goals, visions and clear joint practical plans, and Al- Wataniya University has prepared the internal competition with organization, commitment and high accuracy in selecting the candidate teams based on clear and accurate foundations and criteria. 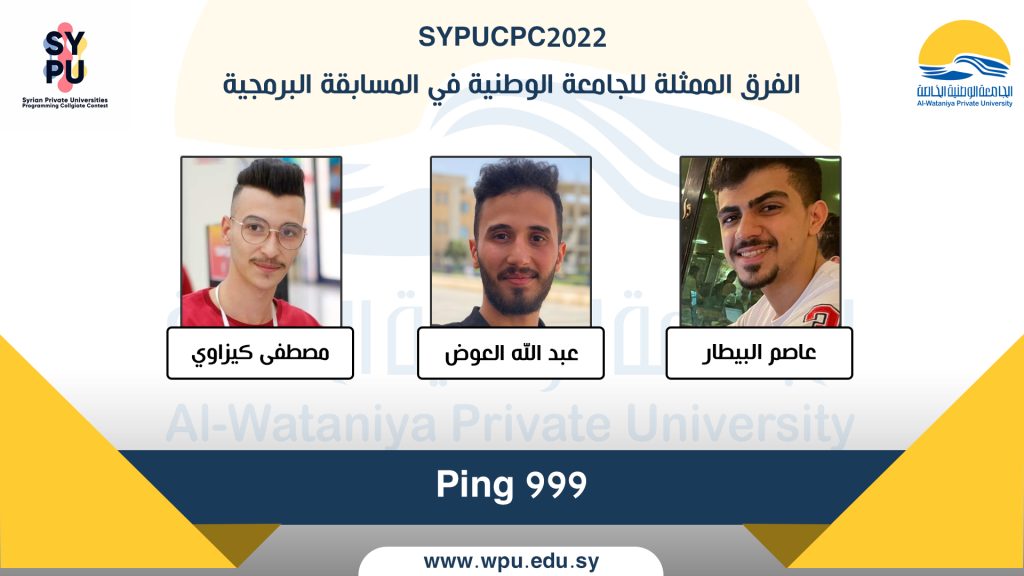 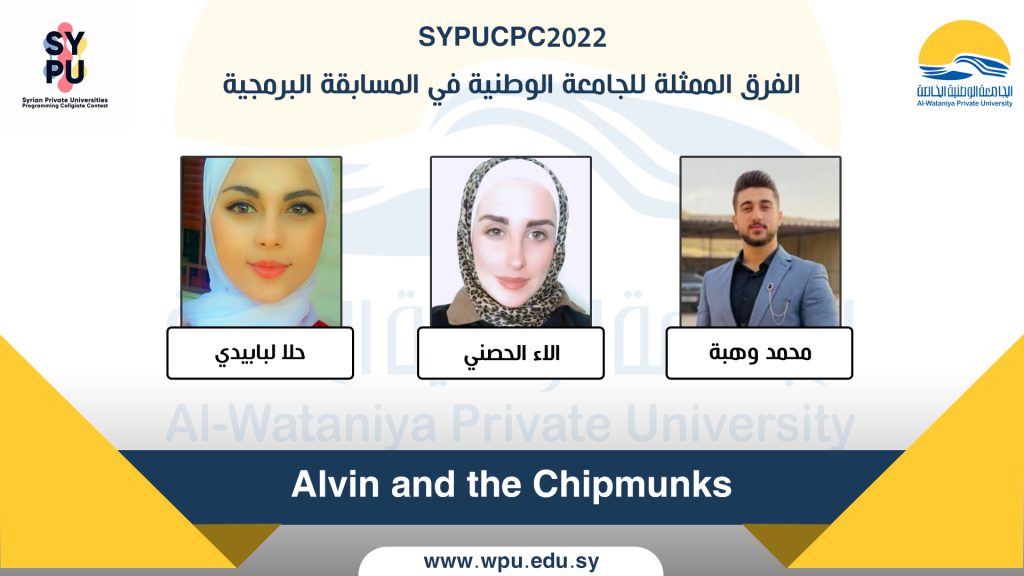 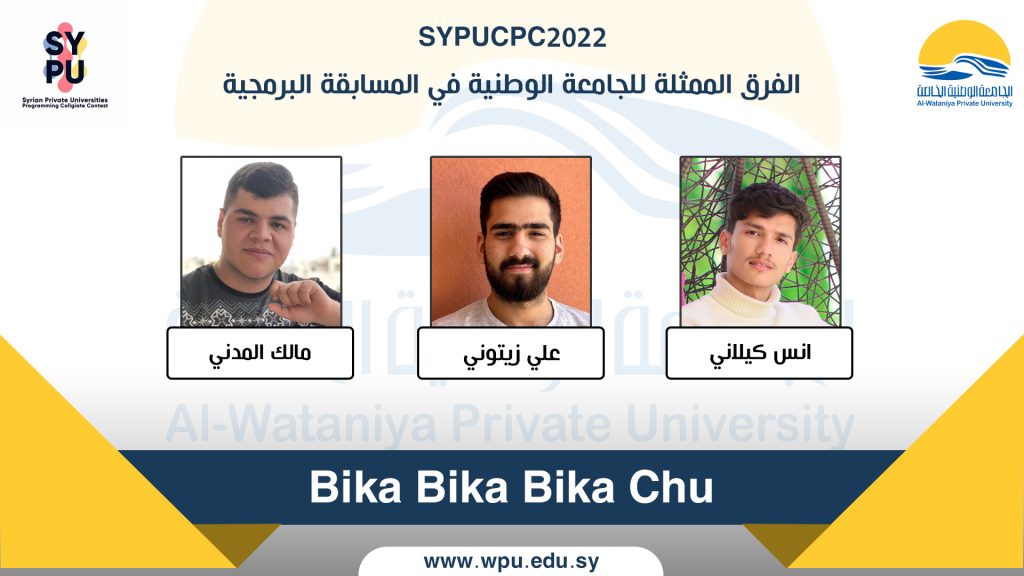 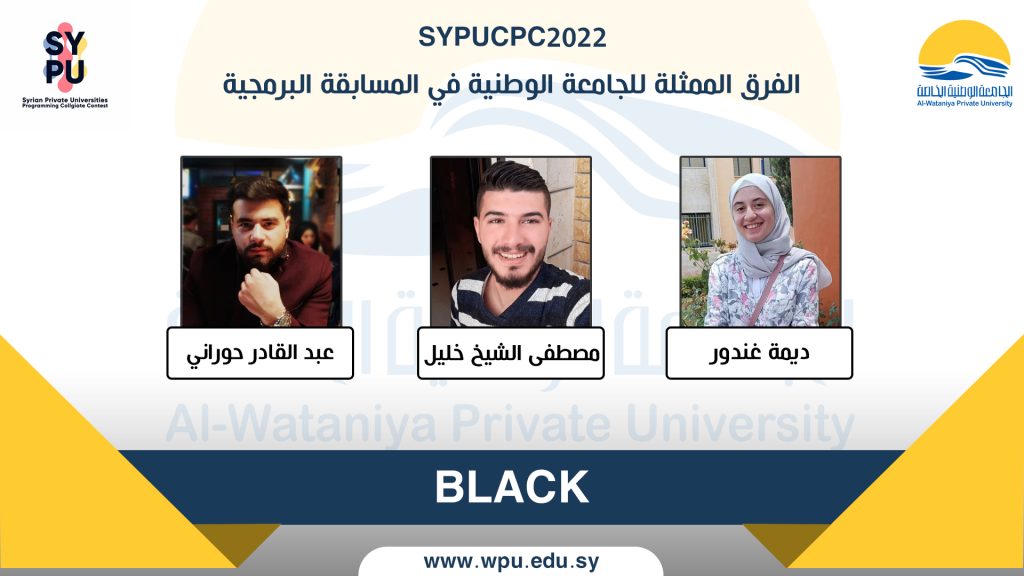 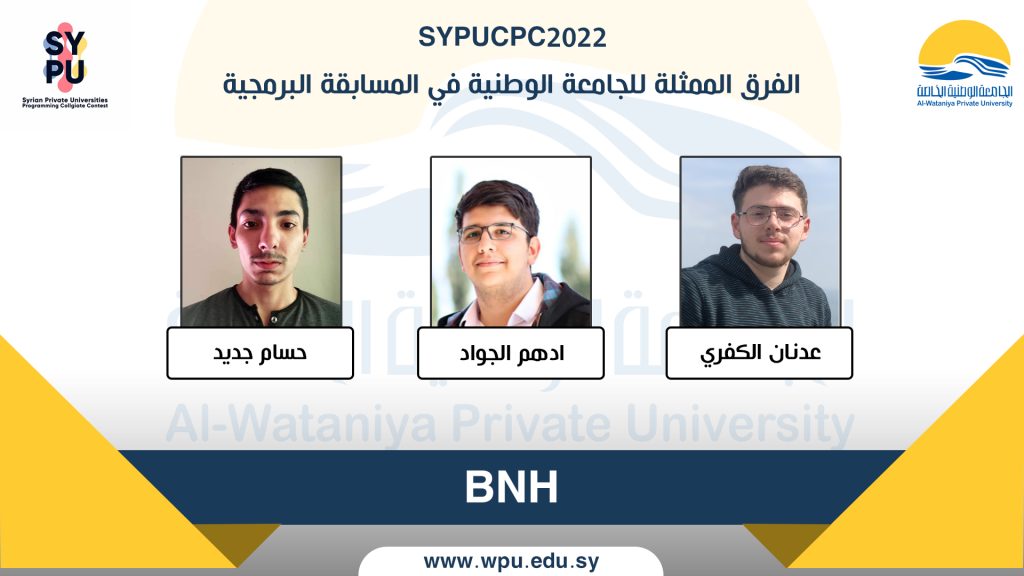 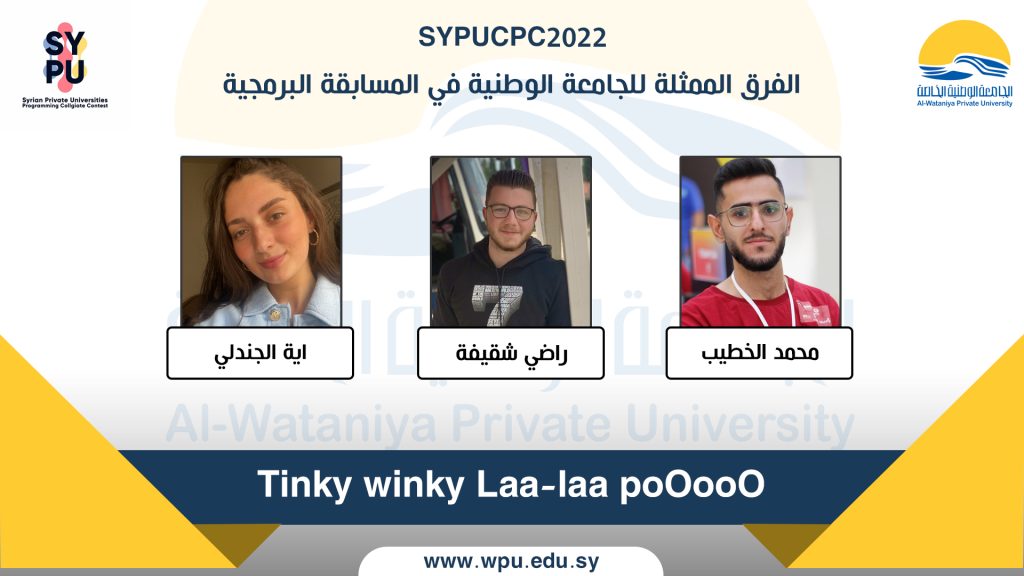 Preparations for SYPUCPC2022 in WPU

– Directorate of Media and Advertising  – Programming and development : Department of digital media 2021  –